I have been trying to shake off election season and move into holiday season… with zero success. Not feeling it. Not feeling Oscars season yet either. [If you need a little Christmas now, here are some ghosts of posts past.]

I did find one little dose of dark-chocolate joy in 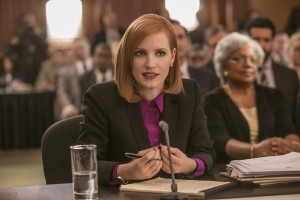 has been getting weird, uneven reviews, because I think it’s advertising itself as a more serious film than it actually is. It’s really a Mr. Smith Goes to Washington (Capra, 1939) for our disillusioned, but fiercely feminist times.

Steven Holden called it “chilly,” with “the savage, self-righteous tone of political warfare in a movie without an iota of humor.” I think though, if you approach the film as a Mr. Smith, as a very wishful fantasy, sprung from the desperate hearts of self-righteous lefties (including yours truly), the whole thing is rather funny: this is what we’re rooting for now, hoping for now, praying for now.

I can’t deny the plot takes an annoying misstep, and, as Peter Debruge complains, the dialogue is “Sorkinesque.” I’m not saying the movie is brilliant. Mr. Smith wasn’t brilliant either. But both are really good movies starring actors at the peak of their game, and both offer up a spit-in-the-eye of mundane, business-as-usual, political corruption. It made me feel better for… five hours or so.

In 1979, Malle visited a small, dairy farming town in Minnesota. Perhaps because Malle was French, he could observe these Americans with detached compassion, and could find dignity, humor, and humanity. Fools rush in where others fly over.

The film takes a much darker turn when it revisits this town in 1985, witnessing the demise of family farming under Reaganomics. The community had voted happily for Reagan and were dramatically disappointed. …You follow my train of thought?

For those of us cloistered on a coast, this is a teensy glimpse of our neighbors and fellow Americans, whom we clearly don’t understand. We need more of this right now. Now.

(Trigger Warning: Bigotry and anti-semitism are more pronounced when things go bad.)(available via FilmStruck)(Malle’s follow-up, … And the Pursuit of Happiness, delved, inspiringly, into the immigrant experience).

A couple more I’ve re-watched while questioning what it means to be American….
All the King’s Men (Robert Rossen, 1949) – “The rise and fall of a corrupt politician, who makes his friends richer and retains power by dint of a populist appeal”? Given the choice between Trump and Willie Stark… never mind.

Born Yesterday (George Cukor, 1950) – Broderick Crawford followed up his Oscar-winning turn in All The King’s Men playing another corrupt politician, but hilariously, opposite William Holden and the irresistible Judy Holiday. Light as Washington cherry blossoms, but with Garson Kanin’s shrewd humor. Heart.

The Candidate (Michael Ritchie, 1972) – If you only know Peter Boyle as a monster singing “Puttin’ on the Ritz,” this film will be a revelation. Robert Redford sports sideburns, and people say things like, “No one’s digging you, man.” The whole point is the depressing interplay between actual political action and manipulation of public opinion. I can’t believe I’m nostalgic for 1970s politics.

Dr. Strangelove (Stanley Kubrick, 1964) – This film used to look like an over-the-top, audacious, dark comedy. George C. Scott even disavowed his (brilliant) performance because he thought Kubrick had pushed it too far. Now it looks like… reality tv. This is the one and only film that can make me laugh and shiver – both to the core – every time.

This site uses Akismet to reduce spam. Learn how your comment data is processed.